Dr. Ming Wang, MD, PhD, a cataract and LASIK surgeon based in Nashville, Tennessee, is a Chinese native and a naturalized U.S. citizen, and is the founding president of the state's first Chinese chamber of commerce (the Tennessee Chinese Chamber of Commerce, www.tccc.us) and co-founder of Tennessee Immigrant and Minority Business Group (www.TIMBG.org). 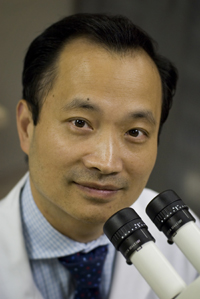 Ming grew up in China during the tumultuous Cultural Revolution, when millions of youth were deported to remote parts of the country and condemned to a life of poverty and hard labor. He escaped the devastating fate of deportation by playing a Chinese violin, called the “er-hu”. Arriving in the U.S. with $50 in his pocket, Ming worked hard and eventually graduated from Harvard & MIT (MD, magna cum laude), received a doctorate degree in laser physics, and completed his residency at Wills Eye Hospital and corneal fellowship at Bascom Palmer Eye Institute. In Dr. Wang’s opinion, business opportunities for U.S. business men and women in China today are tremendous. China has enjoyed an amazing rate of economic growth for the last 30 years, with an average annual GDP growth rate of nearly 10%. China surpassed Japan two years ago as the world's 2nd largest economy (2nd only to the U.S.), and this year China surpassed the U.S. and became the world's largest trader (summation of import and export).

In order to grow the U.S. economy and generate funds to accomplish important goals in this country--such as improving U.S. education and healthcare systems--we have to achieve positive foreign trade, we need to sell more than we purchase. Currently the U.S. has a nearly $400 billion trade deficit with China, and in Tennessee, though we export $2 billion worth of goods to China annually, we purchase 10 times that amount, i.e., $20 billion annually, from China.

From Dr. Wang's perspective, the number one step to take in selling our goods to China--and actually, for any company or nation to sell successfully--is to understand our customers, and in this case, the “customer” is the Chinese. Dr. Wang feels this is where we are falling short. While the Chinese are curious, working hard and learning about the U.S., who Americans are and what we like, the U.S. is not doing the same in the opposite direction. There are more Chinese who can speak a basic level of English than the entire U.S. population today. For every 10,000 Chinese who can speak English, we cannot find one American who can speak a comparable level of Mandarin.

That is where Tennessee Chinese Chamber of Commerce comes in. The mission of the chamber is to help Tennessee business men and women learn about China itself, and its history, culture and people. The goal is to learn what the Chinese want, and then export what they desire to them. The chamber hosts educational forums about various topics related to China-Tennessee trade, and some of the topics from past forums include healthcare, legal systems, comparative study of American and Chinese educational systems, learning the Chinese language, import and export pearls, real estate, tele-medicine, Tennessee State China Trade office, and entertainment and music industries. Currently the top exports from Tennessee to China are cotton, soy beans, heavy machinery and computer parts. While these are traditional successful exports, most of them rely upon our natural resources which can be depleted. However, what define modern Tennessee are things like music, healthcare and religion, and we need to focus on increasing export in these areas. While some people complain about the loss of some manufacturing jobs to China, Dr. Wang feels the same as New York Times reporter Thomas Freeman, who said in his best-selling bookThe World is Flatthat we should “not worry about spilled milk” (i.e., the loss of low-wage manufacturing jobs), we should focus on exporting the high-level of expertise we have in this country in the areas of management, legal systems, consulting, financial systems, technology, etc. Dr. Wang says that is the most effective way to balance our trade deficit with China.

And that, is the mission of the Tennessee Chinese Chamber of Commerce (www.tccc.us) and Tennessee Immigrant and Minority Business Group (www.TIMBG.org), namely to help Tennessee increase its export to China and help balance U.S.’s trade deficit with China. In the last decade, Tennessee has done well in this area, having been ranked #1 in the U.S. in the rate of growth of export to China, and TCCC hopes to continue that momentum! Dr. Wang strongly believes this is the only way we can generate the funds needed to do the important things that we need to do in this country, i.e., improving our education and healthcare systems.

The 2017’s entrance into the U.S. market, of Aier Eye Hospital, the largest private eye hospital group in China (which holds 10% of the entire China’s eye care market today), is a leading example of China’s major companies’ entrance into the U.S. market. Dr. Ming Wang, MD, PhD., the newly appointed CEO of Aier’s entire U.S. operation, Aier-USA, will talk about this exciting new and historical project, which will not only provide patients with more access to eye care, but also help reverse the U.S. job loss by creating more jobs here.

This is a story, of 15-year effort, tenacious and persistent effort, by one American (and an immigrant!), to help America – his adopted country!

We want to get jobs back to the American soil, with regard to a country like China, and that, can be done in one of two ways:

For the past 15 years, Dr. Wang has invested and supported Aier Eye Hospital in China, and has contributed in building it into now the world’s largest private eye hospital group, with 154 eye hospitals throughout China (holding 10% of China’s eye care market today).

It has taken Dr. Wang 15 years, but finally recently he has been able to convince his Aier partners in China, to come to U.S. and invest in America’s healthcare!

Just like Nissan, Aier-USA will be headquartered here in Nashville, and then it will build many centers throughout U.S. It will not only provide American patients with more access to eye care, but also reverse our job loss to China by creating jobs here in America!

Info about Aier-USA, see the Forbes article and another article.

We are a nation of immigrants of the past and present.

Immigrants contribute significantly to the American economy. Based on a report from New American Economy, in 2016, 40.2 percent of Fortune 500 companies have been founded by immigrants or their children. These firms generate $4.8 trillion in revenue.

2/21/17 press conference at the State House about immigrants

TIMBG Annual Taste Around the World